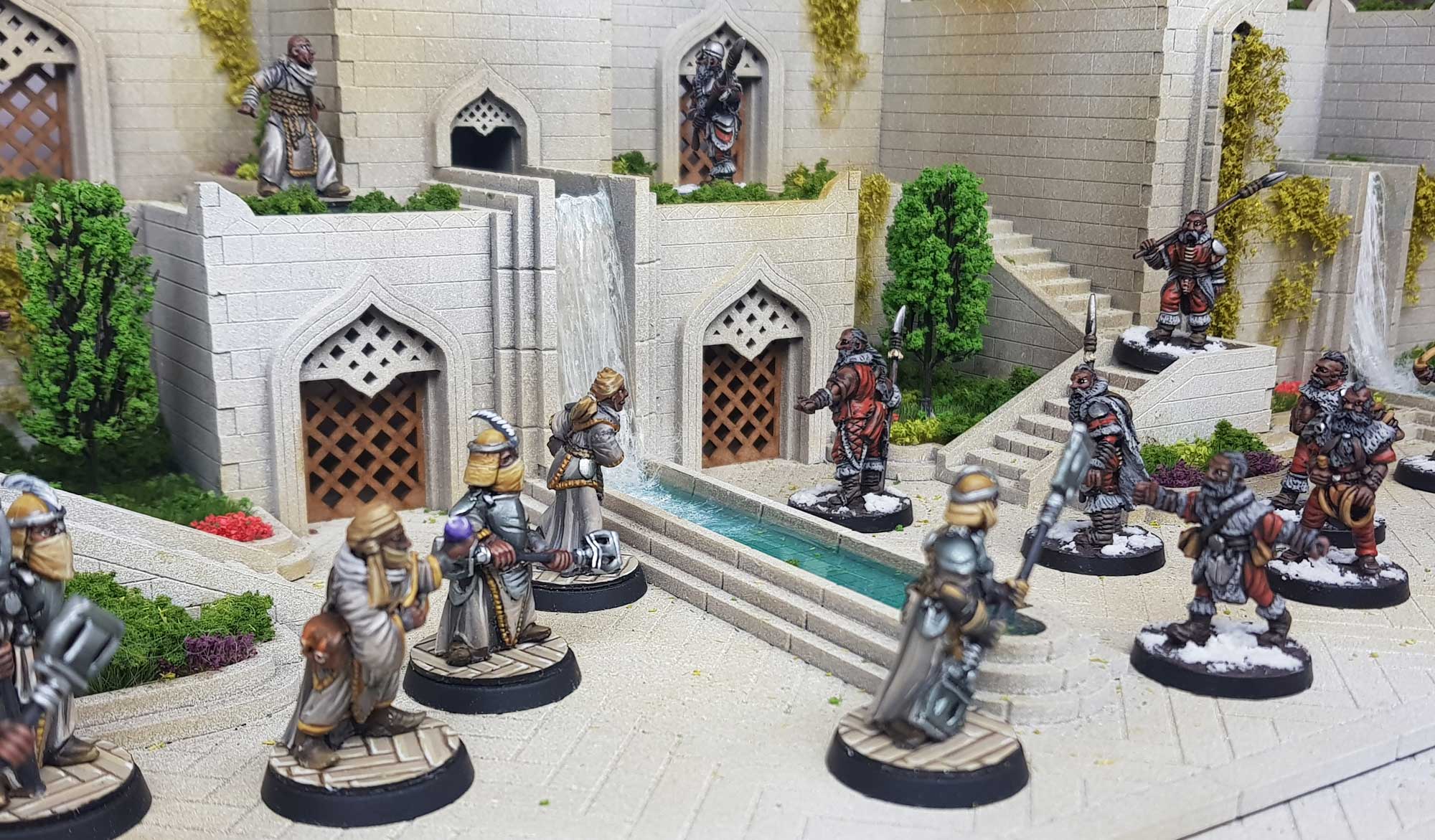 We’ve been having a great time here at MOAB 2019 in Sydney, New South Wales, you can check out my article about Day 1 for some of the highlights.

We had all the figures on display on 3 of the display boards that Scott built for our photographs … they looked amazing and captured loads of attention!

One BIG piece of feedback about our miniatures currently on Kickstarter was that they look WAY better in person. Obviously been able to pick up the figures and look at all the characterful detail is a massive bonus but for those that simply aren’t able to do that we hope that showing some ‘inked’ versions of the casts will help you see what the figures look like without paint.

It can be confusing when looking at painted pictures of miniatures on the internet … is the detail actually there or has skillful painting ‘created’ some of that detail!

Most manufacturers will show you ‘inked’ images of their figures as this helps you actually see the detail that exists. This is a pretty straight forward process of applying a black ink (this can sometimes be an artist-grade ink, such as we use, or boot polish!) that sinks into the recesses allowing you a clearer view of the figures detail and character.

Lets take a closer look at the Anram Mirror!

Mirrors in the world of Tullarn are the ‘main characters’ in the faction. They are the corner stone of your force, having the ability to channel magical energies and manifest; or ‘reflect’, those energies into reality.

The Anram Mirror is a wonderful figure, full of movement and character … he’s posed in a position that is suppose to conjure the fact he is ready to cast his magic upon his foe, waiting to bring up his hands at the perfect moment to bring his energy to bear.

Now, the ‘rank and file’ of the Anram … the Minutemen, first up … Minuteman 1

Minuteman 1 carries a double handled, dual-headed heavy mace. All the Minutemen have been designed to carry a mace with a head that resembles an hourglass (we may or may not have been successful!) and fill the role of your heavy troops.

One of the briefs to Anton Ducrot (our sculptor), from Flytrap Factory was that all the miniatures should be single cast metal figures, this provided some limitations to the styling and posing but in this instance it has worked well, allowing the figure to portray a ‘solid and prepared stance’.

You can see Anton has managed to achieve a hammered metal finish on the helmet, we think it looks great!

Next we have a look at Minute Man 2

Minuteman 2 carries a one-handed, single headed mace … again in the style of the hourglass. He’d still be considered a ‘heavy’ warrior despite having different head-gear and a single-handed weapon.

This figure would have look amazing with his mace held more upright, but to ensure good solid casts each and every time we determined that having the haft of his mace connected to his body would allow the metal to flow better.

Minuteman 3 carries a mace again with the hourglass head. He is suppose to be carrying a double-headed mace however the folds of his clothing is concealing the head closest to the ground … this may be exposed and the second mace head included before the final figures go to production molding.

Again that sense of solidness is represented in this miniature, his enclosed hand (perfect for adding a shield if you’d like him to carry one!) with both hands held close to his body clearly represent the fact that this warrior isn’t going to be moved easily!

Firstly, the Anram are masters of time. In the world and lore of Tullarn the Anram were gifted the ability to control and play with time, a significant advantage over their fellow inhabitants.

The Globidiers carry with them small round ‘time bombs’ that they use in battle to create and influence bubbles of time distortion. They are you shock troops, lightly armoured but still deadly.

Globidier 3 is clutching 2 time bombs, posed in a ‘ready and waiting’ stance this figure whilst not incredibly ‘dynamic’ portrays the “I’m waiting for you” feel. Hooded and masked this figure appears mysterious and with his bombs head closely to his body, from a distance you might not be sure what he has in store for you!

We love this sculpt, it was actually one of the very first concepts! This guy has nothing to hide, his pose is basically saying “Look what I found up my sleeve!”

The sense of movement in this figure is clearly evident, he’s just pulled a time bomb out of his robes and he’s taunting you with it before merry-hell erupts around you!

Again, in this inked images you can see the texture Anton has managed to create on these figures. The Anram are not the exception here, this wonderful ‘tactile’ feel is on display across the range!

And finally, the Anram Scholar … the leader of your warband and the main character in your warband!

This is probably one of my favourite figures in the range so far, again he was also one of the first to be sculpted!

He’s piercing gaze and open out-stretched hand is simply and clearly saying “Here I am, I’m ready”. It’s also been designed to allow you an easy conversion, simply clip the left hand off and replace it with something you might have laying around in your bitz-box!

The Time rod he is carrying could be used as any manor or weapon, but in our lore it allows him to tune with the Mirror and focus his attention … I do know though that I wouldn’t fancy having that collide with my head!

There we go … a closer look at the Anram Nobility pledge now live on Kickstarter!

We’ll be showing the other main pledge levels in more detail, having a look at their ‘inked’ versions of these 28mm metal figures so you can clearly see the wonderful and characterful details these miniatures have!