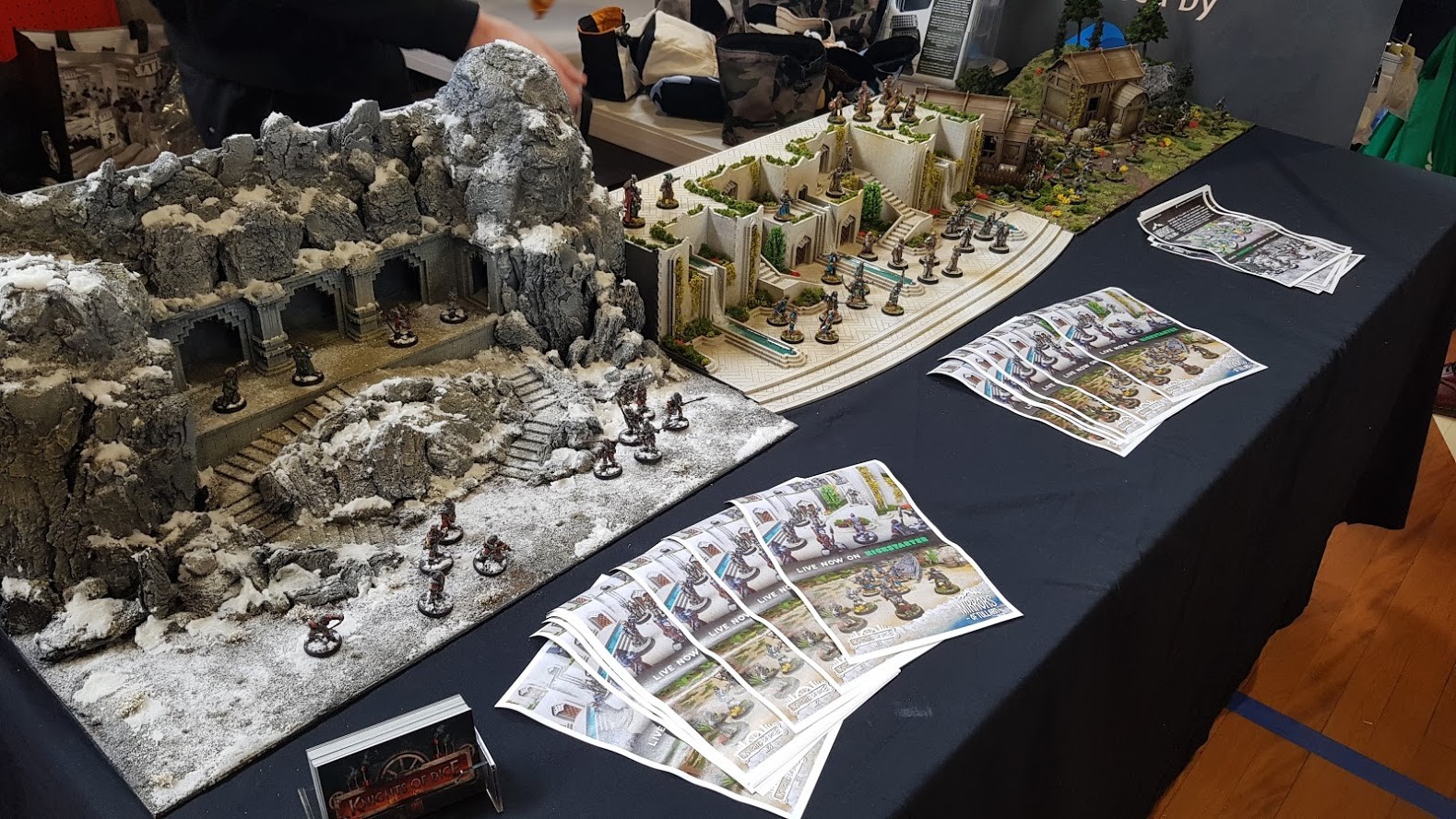 What a crazy couple of weeks here at Knights of Dice … and very little of that time spent concentrating on this campaign!

In hindsight it was a terrible time to run our campaign … right before we went into back to back wargaming shows; MOAB and PAX. MOAB specifically  chewed up a lot of time.  It’s a 3 day show but we spend the better part of 8 days just preparing for, getting to, and coming back from!

Anyhow, the miniatures!  People at both MOAB and PAX loved the miniatures!  Many said they looked so much better in person, and we agree.  But those two shows took a massive amount of time away from this campaign and consequently we didn’t promote the campaign enough!

We are 5 days away from finishing this campaign, and still a ways to go at the rate it’s progressing … entirely our fault for not giving the campaign our full attention.  And with the major All-In pledge only providing ‘real’ value if everything unlocks, I feel the campaign may drop at the end-gate.

I’ve been thinking about cancelling the campaign and relaunching it with a very different ‘funding’ model.  Aside from competing against the behemoth that is the Bones 5  campaign, the pledge levels and stretch goals just didn’t really provide enough ‘wow’.

Instead of people pledging for a limited number of the faction figures (7 figures per faction) and then buying extra figures from the add-ons when they unlock with the occassional freebie thrown in, we can do something much more rewarding!

I’ve also been told by several well respected friends in the industry, that we should have included the game we’ve been developing.  It’s not finished, it’s close to going into BETA testing … but its certainly not ‘finished’, it will need LOADS of testing.   Scott and I have been working on it, off and on and very slowly, for around 18 months now (maybe more, time flies so fast!) … just as an idea, then some rules, then some prototype pieces and cards, occasional play-testing etc.  Then around 6 months (again, maybe more!) our good friend Charles Bryers came on board to really iron out and vastly improve what Scott and I had developed.  He’s written a good set of rules, they’re soild but they need a little time to be finessed and polish enough for beta testing, but it’s a fun and exciting game.

We do have rules; they are funnily enough called Mirrors of Tullarn!  We would love to release the game …. we just need to finish it!  Unlike the miniatures that are ready to go … the rules will take a little longer, and loads of help to playtest!

I didn’t want to confuse this campaign by trying to finish the rules so I could include them in this campaign and told people “Not at the moment, maybe … I’m not sure) when they ask at the shows (and in message etc), “Is there a set of rules for these figures”.   But everyone is on board to actually ramp it up and move things along. Instead of slow working on it here and there, your funding will help us do it faster!

A new campaign, with better rewards and stretch goals, allows us to not only release the miniatures, but also finish the PDF rules … which you get free.  It’s simple.  The funding goal is the same, I need 8K for the production costs for all the figures.  When the campaign funds ALL the figures will be made available as add-ons. You’ll back that campaign using the various pledge levels; ‘I’ll back $5 for the exclusive figure and I’ll choose any others I like when the campaign funds’ or ‘I’ll back for one of the games 4 main factions (the whole faction, not just 7 of them!), and get more freebies as they are reached’ etc.

The difference being, instead of unlocking the figures at higher stretch goals and making them available as a paid add-on (stupid idea Viv!), I unlock all the miniatures at 8k (because 8k pays for the production cost of them all!) and as the stretch goals go higher, you get more of them for free (so don’t need to add them as add-ons!), and any extra funding helps us to progress the game faster … and gives you free dice, and tokens, miniatures, accessories and possibly even some cool new scenery!  Better?  Much better!

You live and you learn!

So … I need your feedback.

I only have a few days to decide.  Either I let the campaign run its course and it either fails, or funds ever-so-slightly over $8k and people get very few figures/freebies.

Or … I cancel it now, redo the campaign and get the rules into a position (before we re-launch) where actually reaching stretch goals will allow us to ‘actually’ progress the game to completion (getting tokens made, dice, cards, accessories etc.) whilst giving you free figures and other stuff.

I’m very tempted to cancel the campaign.  The new campaign provides you REAL rewards, and allows us to ‘actually’ finish the rules and get things for it made!

This was a bad month for us to start a campaign, simply due to the time being spent elsewhere.  The funding model was poorly structured, and as my good friends have told me, “people love to get involved, get them involved in finishing the game!”, it makes a mountain of sense to me to give it a chance.  I only need 8k to do the figures, you can have them … any extra funding helps me finish more … which you get free!

Let me know … cancel and relaunch with loads of rewards? Or , let it run it’s course and see what happens?