I’ve been a BIG fan of Lord of the Rings since the original trilogy was released.  Unfortunately I have still not read any of the books (I am about 3/4 of the way through The Hobbit though, and have listened to the Silmarillion recently!) but that hasn’t dampened my enjoyment of the story, I think I must have watched the complete extended edition of Lord of the Rings at least 30 times.  It’s no surprise then that I’ve also been a fan of the game released by Games Workshop from the beginning.

With the new edition of the game, Middle Earth: Strategy Battle Games being released in 2018 (or was it 2019?) I have been getting back into the game with a vengeance! Over the years I’ve collected quite a few figures, many of them coming from the old Strategy Battle Games magazines and others from various trades and second hand groups.

The Rohan army below I painted as part of a 24 hour challenge was so much fun!  Together with my friend Edward, who was also painting his Rohan, I churned my way through them over the course of the 24 hours.  It was a wonderful project and I thoroughly enjoyed the entire process … painting for 24 hours (or being awake, working etc) is not uncommon for me, I’d very much like to do another 24 hour challenge soon!

Like all miniature wargaming hobbyists, I can’t resist adding more and more models to my collection – yes I tell myself, “Don’t buy anything new until you’ve painted everything”, but who are we kidding right?  So after I finished the Rohan (which I subsequently now have more to paint!), I was itching to paint more MESBG figures!

I fished around in the loft at the studio, as I knew I had some Warriors of the Dead (from the Battle of Pelennor Fields boxed set) that I had picked up off the Australian Buy/Swap/Sell group on Facebook sometime ago.  They would be an easy paint and help add more completed models to my collection quickly!

I’ve seen so many different ways that people have painted these models, but I wanted something was going to be quick and easy to do.  So I started with a black primer and then fished around for paints..

It’s a little unorthodox (but I’ve never been one to ‘follow the trend’), but I actually used some regular acrylic house paints (the kind you use to paint your walls at home) and decided a good place to start would be a complete coverage over the black with the airbrush.  In order to get this rather thick paint through the airbrush I thinned it 50/50 with water.

At first I was concerned that the paint wouldn’t stick, that it would be too thick and obscure details, wouldn’t take other paints over it well.  But none of those things were a problem, in fact I’d probably use regular house paints again on other miniature projects as you can pick up any colour you like … you can even colour match if you take a sample in to the paint department!

I wanted them to have a ‘green glow’ appearance, but never having done it before not really planning out anything I do I cracked ahead and popped on a Thraka Green wash.  This subsequently ends up doing very little, but it’s there, you can see it sometimes but I think this approach was absolutely no good in contributing to the ‘green glow’.

At this point I revert back to ‘regular’ miniature paints, this time I used some Neutral Grey from Vallejo Model Colour and gave all the miniatures a quick drybrush to help the edges pop back out and blend that green wash back into the recesses.

For the final highlight I used Fortress Grey from Citadel (Games Workshop), giving the figures another gentle drybrush to help make the very peaks and details pop out.  It worked, kind of … it is a lazy but quick paint scheme and that is really all I wanted to do for these chaps.

I love using cheap basing materials, FREE basing materials are even better!  I’ve been using dirt from my garden on many of my miniature bases for years now.  After baking it in the oven for 30 minutes and letting it cool it’s good to use on my bases.

I spread a layer of PVA, dip the base in the dirt and let is sit for around 10 minutes.  I then use a pipette and using some PVA thinned with water (at a ratio of maybe 1 part glue to 4 parts water), I douse the dirt and then sprinkle some flock on immediately.  I used foam flock for these guys which soaks up some of that glue and adheres well enough for me.

I had really enjoyed painting those warriors, they were quick, simple but effective.  After I finished them and packed everything away I realised that I needed some cavalry for this army!

So I fished about in my hobby room and remembered that I had a long abandoned undead project for Kings of War and thought I could pinch some of the riders to use in this army.  They got the same paint treatment as the warriors and whilst the unit in the MESBG game doesn’t have lances, I thought they would be fine to use for the moment! 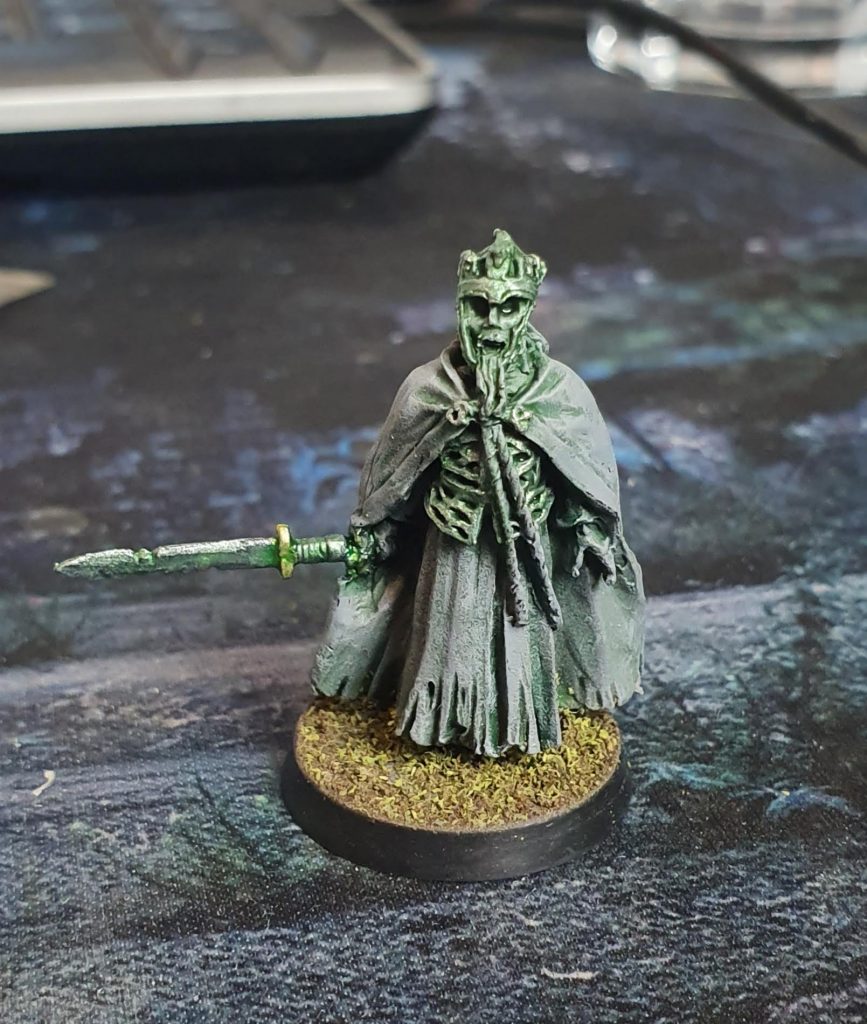 Once everything was finished, I noticed the sword on the King was missing … seems to be fairly common as other people on Facebook said that theirs had snapped off too.  I wasn’t feeling terribly adventurous so I simply took a plastic sword from my bits box and after doing a little filing I pinned it straight on … handle included!!

I also picked out some armour and the crown to help give him some more visual interest, using some kind of metallic colour … maybe Chainmail Silver from Vallejo?  A Thraka Green wash over that completed the army.

Overall this was a fun project.  Nice and quick and simple and in the space of an evening I added another group of painted figures to my collection!

Viv ChandraI've been a wargamer since my mid-teens, it's been a passion of mine since I played my first game of Warhammer Fantasy in 1994. Knights of Dice is the culmination of many years of scratch building terrain and a natural extension of the part of the hobby I love more than anything ... creating the little worlds in which we play!
Posted in:
Hobby Blog, Painting Logs
Leave a Reply Cancel reply