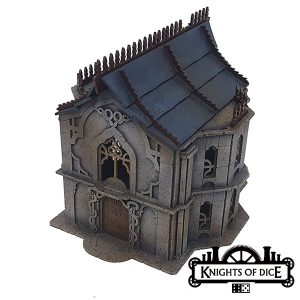 The peoples of the theocratic Kingdom of Na’Sain are deeply reverent to their god, the mighty serpent lord The Rau’Kin. To the populations of the kingdoms and empires outside of Na’Sain, the great worm is seen as a destroyer and a fell beast of evil portent. Worship of the deceiver outside Na’Sain is met with high suspicion at the most charitable interpretation, or treasonous heresy punishable by death to most. The Na’Sain faith in The Rau’Kin has led to many tensions and outright conflicts with neighbouring powers, and though a fragile armistice currently stands between the major forces, the deep religious divides could spark hostilities with the most minor of provocations.

The Na’Sain Temple kit is constructed 1.8mm mdf  It makes a great place of worship, tomb or even just an elaborate dwelling.

This product is sold as a flat-pack kit. It is sold unpainted and requires assembly

Be the first to review “Na’Sain Temple” Cancel reply