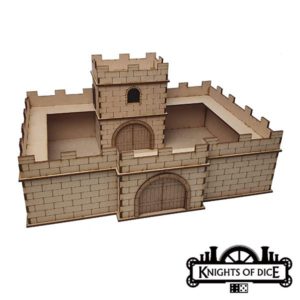 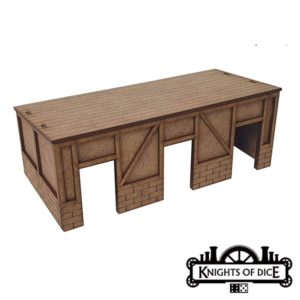 This model kit features etched brickwork on the exterior and fully functioning gates and doors.  It consists of 3mm and 1.85mm components and is an easy kit to assemble.

A milecastle was a small fort (fortlet), a rectangular fortification built during the period of the Roman Empire. They were placed at intervals of approximately one Roman mile along several major frontiers, for example Hadrian’s Wall in Great Britain (Britannia in the Roman period), hence the name.

Along Hadrian’s Wall, milecastles were initially constructed of stone in the eastern two thirds, and stacked turf with a wooden palisade in the western third, though the turf milecastles were later rebuilt in stone. Size varied, but in general they were about 15m by 18m (16 by 20 yards) internally, with stone walls as much as 3m (10 feet) thick and probably 5m to 6m (17 to 20 feet) high, to match the height of the adjacent wall. There were 80 milecastles and 158 turrets.

Be the first to review “Roman Mile Fort” Cancel reply