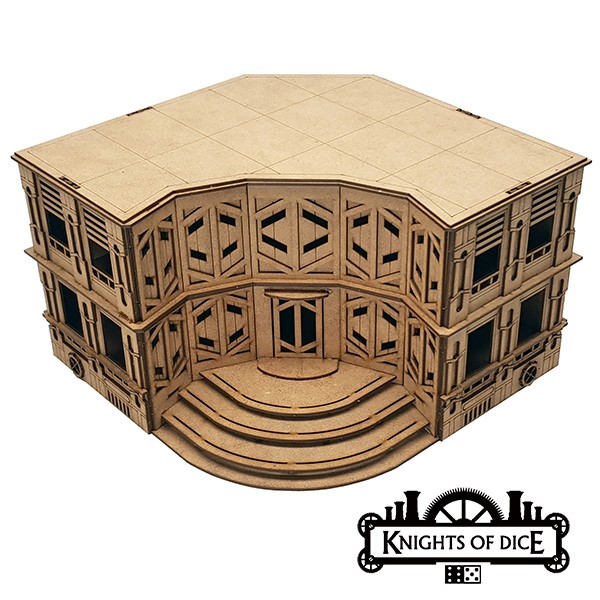 We are gearing up for the new exciting Cyberpunk game from Osprey “Reality’s Edge” written by the super talented Joseph MacGuire of This Is Not A Test fame, so we decided to add a new building to the Neo Sentry: Easy District range to add to our collection of Cyberpunk kits!

The RENN-TV Broadcast Hub is a decent sized kit with an interesting frontage that looks great as a corner building or as part of a complex with several copies of the kit. It includes opening doors and has full interior access! It will fit right at home in the neon sprawl of Easy District! More kits coming to Easy District soon, (including scatter and smaller obstacles that the range sorely needs!).

We’ve intentionally left the roof of this kit flat to allow you to place other objects such as smaller Rooftop Access kits or Cell Towers or other widgets and gubbins, some security cameras would look amazing on this kit too

“For decades, the seediest denizens of the neon sprawl of Easy District have tuned in to hundreds of distributed pirate Dark Web networks to conduct their shady business. By far the largest and most notorious of these is known as RENN-TV (amongst countless other aliases). RENN-TV facilitates all manner of illicit services and black market dealings to take place away from the ever watchful eyes of Okami Police Inc, Cyclops Security and Yuka Corp. The network is dispersed using decentralised bootleg broadcast hubs hidden within countless non descript buildings and signal boosting nodes throughout the district, meaning that if the boys in blue (or black, or optical camo) execute a raid, the RENN-TV pirate signal will continue cutting through the static.”

Viv ChandraI've been a wargamer since my mid-teens, it's been a passion of mine since I played my first game of Warhammer Fantasy in 1994. Knights of Dice is the culmination of many years of scratch building terrain and a natural extension of the part of the hobby I love more than anything ... creating the little worlds in which we play!
Posted in:
Latest News
Leave a Reply Cancel reply