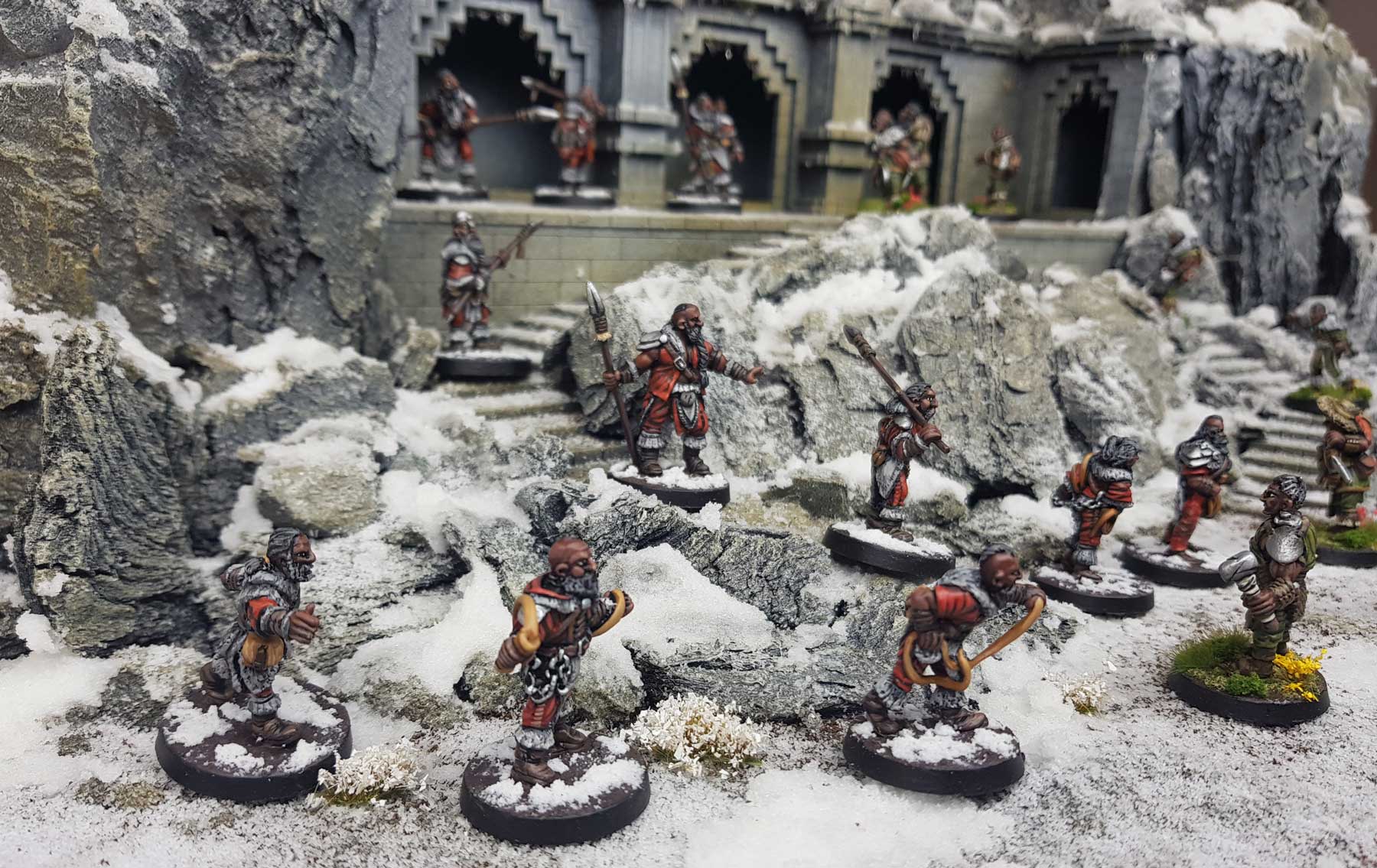 We continue our series of articles on having a closer look at the ‘inked’ versions of the miniatures, allowing you to see the detail on these characterful figures without paint ‘confusing’ the situation.

In this article we explore the Tarusa Chieftain pledge on Kickstarter

The Tarusa are a hardy people, living in the harsh mountain ranges of Tullarn. A brutal and dominant regime keeps their population firmly under control and authorises the use of extreme force, kidnapping and slavery when facing and dealing with their enemy.

Dressed in rugged winter clothing; the Tarusa whom carve their homes into the mountains and cliff sides, are instantly recognisable. Anton Ducrot (from Flytrap Factory) who has sculpted our full range of figures for Mirrors of Tullarn has done a wonderful job on this set, the detail and texture in the fabrics and furs is excellent.

Let’s have a closer look at the figures and their detail. First we have a look at Raider 2.

The first thing that pops about the Tarusa is the detail! Straps, belts, ropes (for tying people up!) galore … and with some external metal armour plating these figures simply look gorgeous.

Raider 2 is a great example of a Tarusa warrior, armed with a spear for both hunting and fighting his stance clearly portrays someone who is ready .. either to receive a charge, or thrust out and attack the enemy.

As opposed to Raider 2, Raider 4 is a little more relaxed!

I really love this figure, not only does he clearly represent a Tarusa Raider, but all the bits and pieces he is carrying (the backpack, ropes etc) make him the perfect adventurer or NPC in any game setting or campaign!

This guy is a little more relaxed for a savage and brutal Tarusa raider but his stance and ‘spear over the shoulder’ pose portrays a good sense of movement … at least I think so.

There isn’t really a lot of ‘movement’ in this sculpt but his pose is still interesting, he’s more ‘alert’ I think than Raider 4, whom despite having more movement in his pose is a little more ‘aimless’, as any wandering adventure might be! Raider 5 on the other hand is clearly ready for combat.

I love all the little metal armour plates hanging off this guy, it really helps enforce the idea that he is suppose to be a heavily armoured warrior, which can be hard to depict well if they are also suppose to be wearing heavy furs to keep them warm!

As lightly armoured warriors the trappers feature less armour plating and scales, and more ropes and chains. Armed with whips; which we have tried to ensure look good whilst at the same time being castable nicely in metal as a single piece, the trappers are tasked with the capture and torture of those that oppose the Tarusa regime.

It’s time to have a look at the lightly armoured Trappers, staring with Trapper 1

As I mentioned above, the Tarusa are a brutal regime whom strongly approve of and encourage, slavery and torture. It’s no use just killing everything they fight, they need to capture them if they are to become slaves! This is where the trappers with the whips come into play.

Trapper 1 is a wonderful figure, full of movement and fierce looking! His shaved head and that big beard, rushing forward with his whip ready … this evokes the real nature of the Tarusa Trappers!

Trapper 4 again is another fierce looking warrior … that pony tail draped off one side of his shaved head!

This is another wonderful figure that really highlights the detail that Anton has achieved in these sculpts! Not only are they riddled with bags, pouches, chains etc but the texture in the clothing and furs, even the leather is clearly evident.

Again we’ve tried to make sure that the sculpts represent what the Tarusa are about; domination and fear, but at the same time ensure we have single-piece metal models. The whip this guy is carrying wraps nicely around his body and whilst his stance is fairly static we hope it still shows that he is ready to flick that whip out at a moments notice.

Now we come to the characters in the Tarusa Chieftain pledge level, first up the Tarusa Mirror

This is probably the only figure in the range that we want to re-do … he’s a fun figure that’s certainly usable, but according to our world-lore he just isn’t right. None-the-less we’ve included him in the faction as it doesn’t make sense to relegate him to the side lines!

Tarusan Mirrors are not, typically, natively born Tarusans. Unlike the other regions of Tullarn where Mirrors are identified at young ages and trained to use their magical powers, the Tarusa Mirrors are usually kidnapped and forced into a live of servitude due to the lack of natively born Mirrors.

In stark contrast to the other factions in Tullarn that generally revere their young Mirrors, those forced into service for Tarusa are treated harshly, often shackled and tortured, their bodies branded and scarred with motifs and iconography.

Despite this figure not hitting the mark in terms of what Tarusa Mirrors should be, it’s still a characterful figure having stumpy and dwarvish proportions and again loads of detail that makes painting a joy. It can be easily converted too, just chop the hands and glue on something from your bits-box!

In stark contrast to the Mirror, this figure is on point … the Tarusa Chieftain, as with much of the range, is amongst my favourite figures!

The Chieftain is the main character in your warband and this guy looks like a proper chieftain! His long braided beard, the shaven head with pony tail his exposed muscular arms … this guy means business!

Once again Anton has achieved an excellent level of detail that makes painting this figure a joy, he is less armoured than the Raiders and not being afraid of the cold he’s happy to expose himself to the elements … and his enemies, fight him at your own peril!

There we go, a closer look at the Tarusa Chieftain pledge currently funding on Kickstarter.

Up next we’ll have a look at another faction pledge before you jump into the adventurers, wandering Knights and the feared Na’Sain Mercenaries!

Jump onto Kickstarter and back the project and please share it with your friends and gaming group.