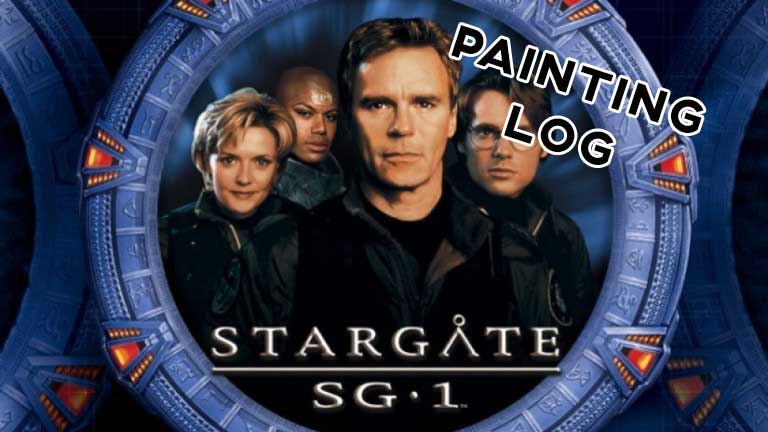 I’m a massive fan of Stargate: SG1 and have been for many years.  It is one of my go-to shows to play in the background whilst I paint miniatures, I’ve probably watched (or played) every episode maybe 30+ times.  It’s available on Stan here in Australia so is streamed regularly!  I am trying to find more podcasts to listen to though so I can get away from the issue with ending up watching an episode instead of actually painting!

Over the years I’ve tried to find various Stargate figures, and I did find some official once that were produced many years ago but they were hard to find.  I did end up finding some on eBay but they are more 25mm scale than the usual 28mm I game with.  I can’t seem to find those figures amongst my considerable horde, they’ll be somewhere at the studio!  If I do find them, I’ll update this blog with the details.

A few years ago, I came across some awesome looking figures whilst doing some Google Image searches and after a little investigation I found out they were made by Eureka Miniatures … wonderful, they are local to me so shouldn’t be hard to get!  Alas, I was quite wrong.  🙁

The image above is from the Captain Apathy blog and is one of those that I found during my search.  I have used it without permission but provided a link to his blog, so please check it out … lots of stuff there!

I’ve got plenty of modern figures suitable as SG teams but the Jaffa were perfect!  But as I said, it wasn’t to be as the line was canned under a Cease & Desist from MGM (Metro-Goldwyn-Mayer) and when I rang Nic from Eureka he said they hadn’t been available for a long time.

Whilst the line had been canned, it would seem that my luck wasn’t completely out though.  Earlier this year my wife managed to find some on eBay … how she knew what to look for, I have no idea.  She is WAY more thoughtful than I am in all things birthdays, presents etc. and after talking with a friend of mine about what to search for, she managed to snag a load and gave them to me for my 42nd birthday earlier this year!

This blog will be my Painting Log as I progress through them.  First up is a batch of Serpent Guard. 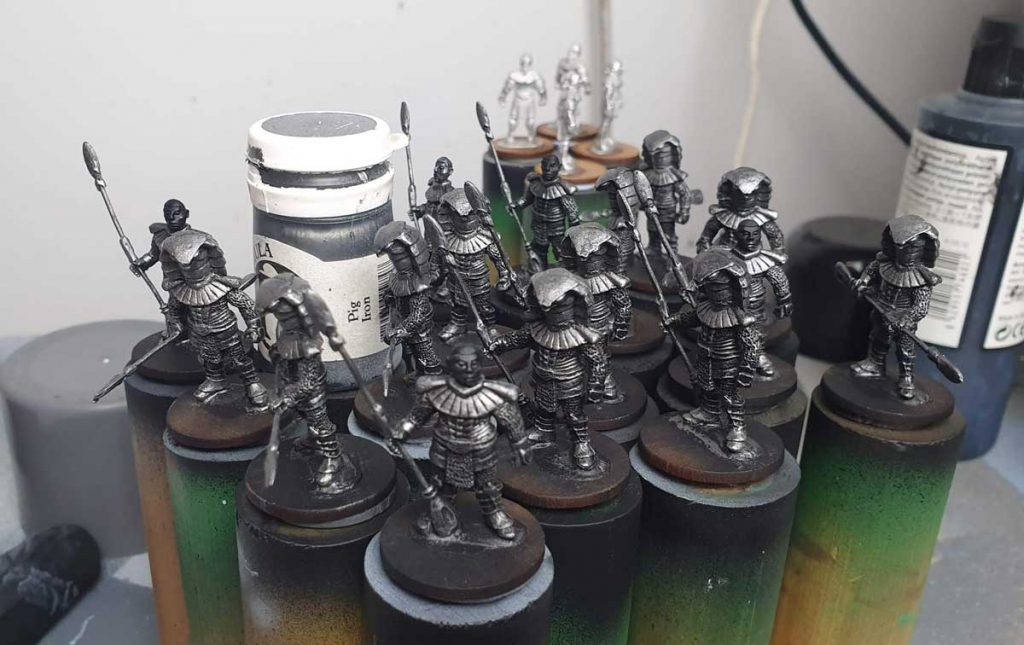 The first step, as with any metal miniature was to give them a good clean in warm soapy water and a scrub with an old tooth brush.  I’m not too fussed with mold lines on these figures so I looked them over and removed any visible flash but didn’t fuss to much about scraping back mold lines or getting to detailed with the cleanup.

I primed them with an airbrush using Vallejo Surface Primer, Black 74.602 – I didn’t think it necessary to take a picture of that step!

After the primer, next was a quick drybrush using Pig Iron from the Formula P3 range.  I did notice that I missed some skull caps when I took the picture, those have been fixed. 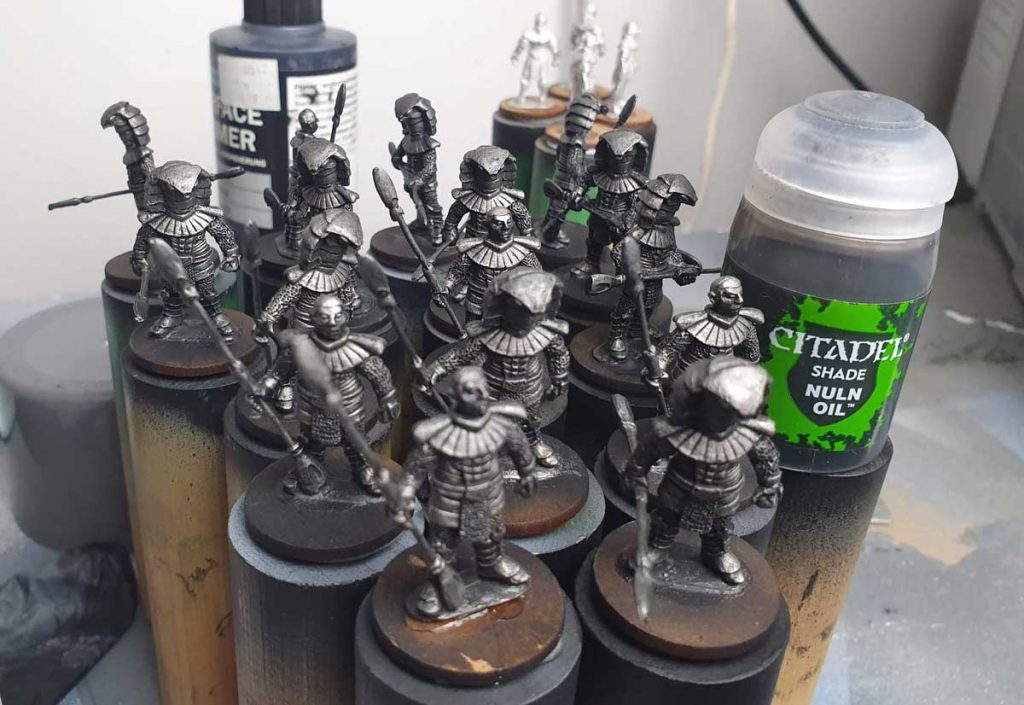 Next step is to give the whole miniature a wash with Nuln Oil from Citadel.  I’m a little conflicted with the miniatures so far, obviously the Jaffa are covered (at least the fully armoured ones) with shiny metal armour but I’m not sure if I should add some colour to the miniatures to help them ‘pop’ a little on the table.  Next step will most likely be a quick drybrush with a brighter metal, or perhaps I might spend some time and edge highlight them with something much brighter. 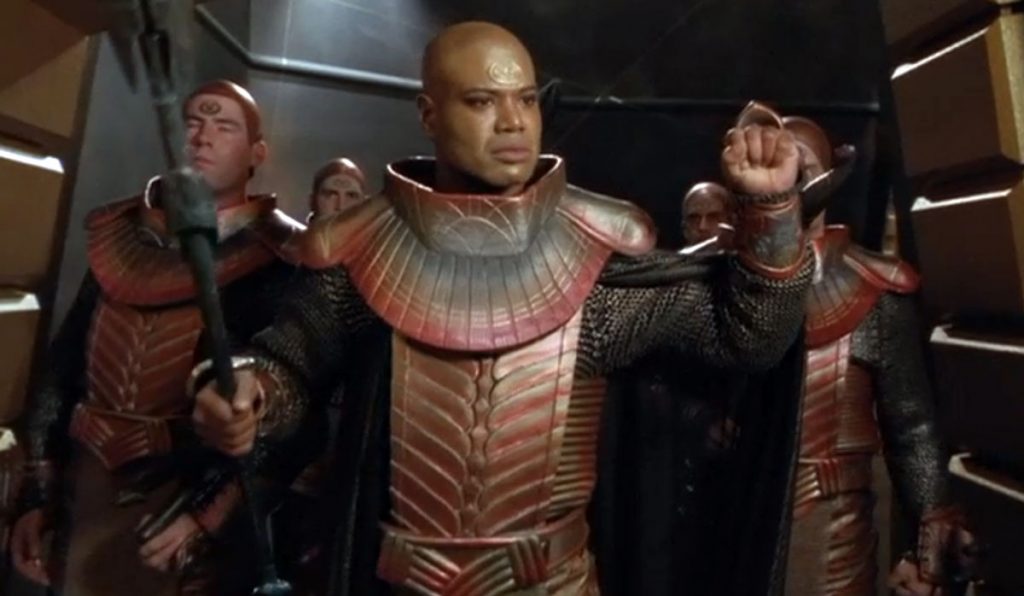 I was watching an episode of SG1 tonight (well, it was playing in the background) whilst I pottered around doing a few bits and pieces on the computer and noticed in that episode (s5: E1 – Enemies), you know the one, where Teal’c is brainwashed by Apophis and they get into all the business with the Replicators?  Yeah, that one.  Anyway, I noticed in that episode that the Jaffa have bronze coloured armour pieces so I thought, why not, I’ll add some to my Jaffa.  Whilst the armour the miniatures is wearing is not the same as that screen version if S5:E1 it’s good enough and will help add some colour. 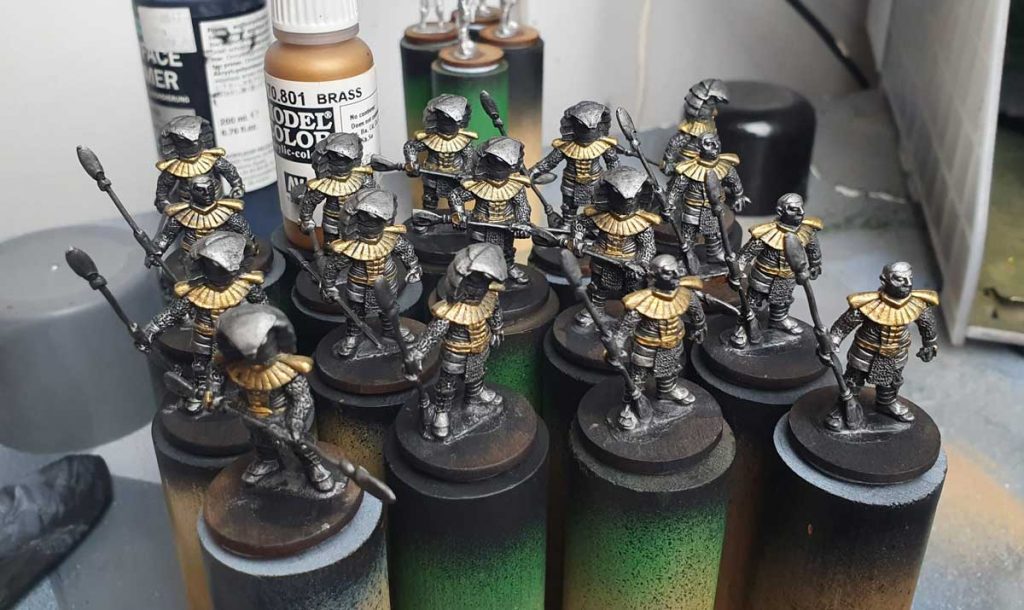 I added a layer of Bronze from Vallejo, colour 70.801.  As with all my paints, I thinned it a little, just a little.  You need to be careful with metallics as you can thin them too much, easily.  Just a drop of water to a drop or two of paint.  I wish I had done this step before I added the Nuln Oil wash as I will add another layer over the brass.  The layer is thin, but I hope that there is still some detail in the recesses to capture the wash.  I’m still a little conflicted about breaking up the armour even further by painting the ‘skirt’ in a cloth colour.  It is a metallic colour in the show, but again from a ‘miniature on the tabletop’ perspective I wonder if adding some extra colour, or cloth material will help make them ‘pop’ a little more. 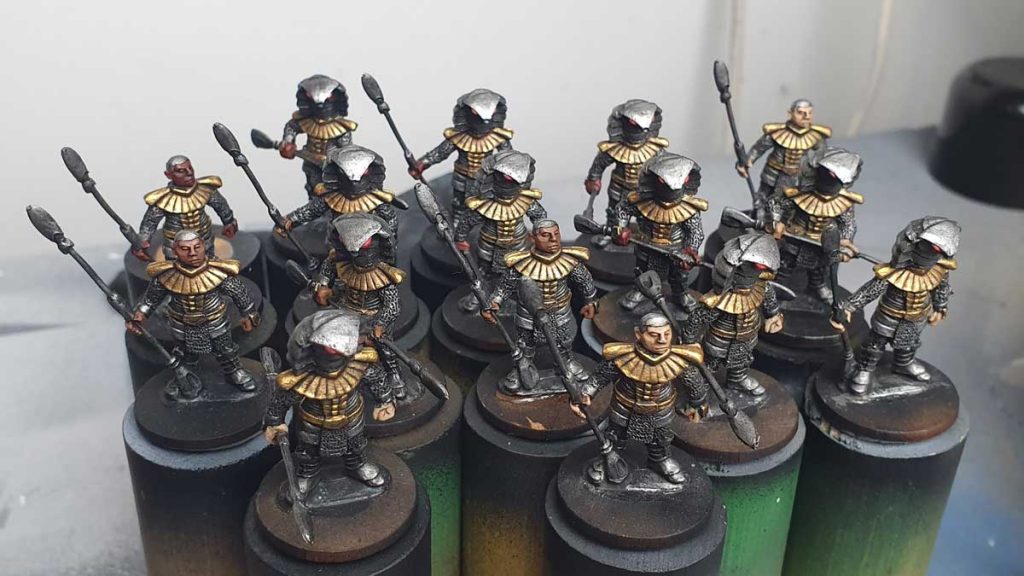 A lot has happened since the last update!  I did take pictures of each step but to speed things up and get to the point, the miniatures are pretty much ready for basing!

I gave the Brass layer another wash with Agrax Earthshade, and then came back with the brass colour and highlighted the edges trying to leave a little of the darkened brass behind.

I used a few different skin shades to pick out the faces and hands, and then gave them all a wash with Agrax Earthshade, I don’t think I’ll be bothered (at this stage) to highlight the skin any further, that is always something I can do later down the track if I feel it’s necessary or have the compulsion to make them pop a little more.

The eye lenses on the helmets were picked out with some Flat Red from Vallejo.

I mixed up a batch of basing ‘goop’.  There are commerical products available obviously, but I didn’t have anything on hand and wanted to crack on with getting things done so used what I had at hand.  I used some pre-mixed wall filler combined with some PVA glue, water and dirt from my yard (which I baked in the oven to ensure it was free of bugs/bacteria etc) and gave it a good mix.  I then spread that in a fairly thick layer.  It dried fairly flat, so next time I either need to pile it on more, or add some more material to make it more ‘chunky’. 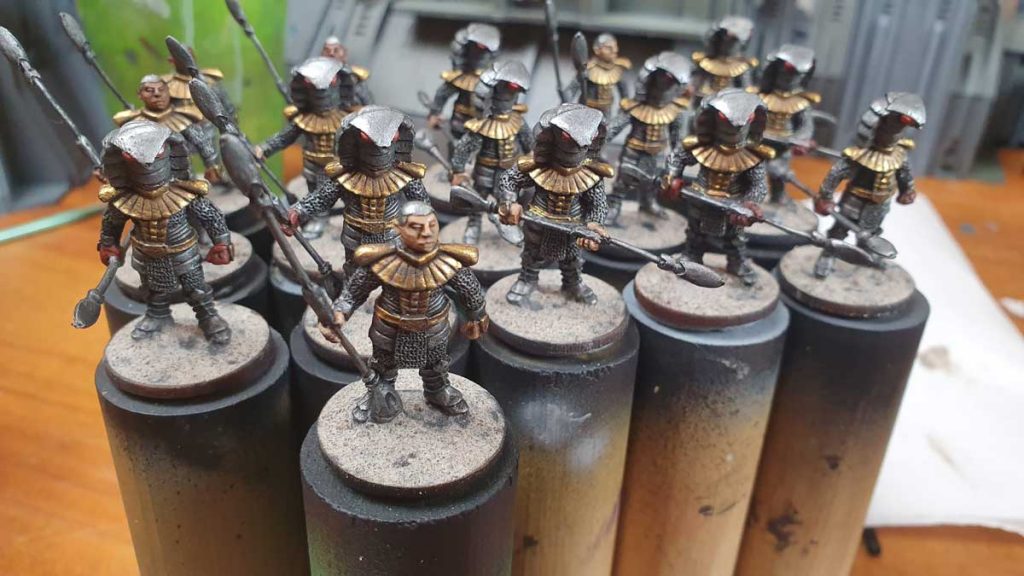 As with everything I do, I picked a colour for the bases almost at random.  Always experimenting, I decided to use some Leather Brown (Vallejo, Model Colour 72040) for the base colour of the bases.  I wasn’t really sure what I wanted to achieve though i was thinking they would be on a greenish world and I’d add some flock and tufts to the base, but this colour turned out much lighter and more appropriate for a desert base – that’s not really suprising though, you can see what colour the paint is before squeezing some out of the bottle!  🙂 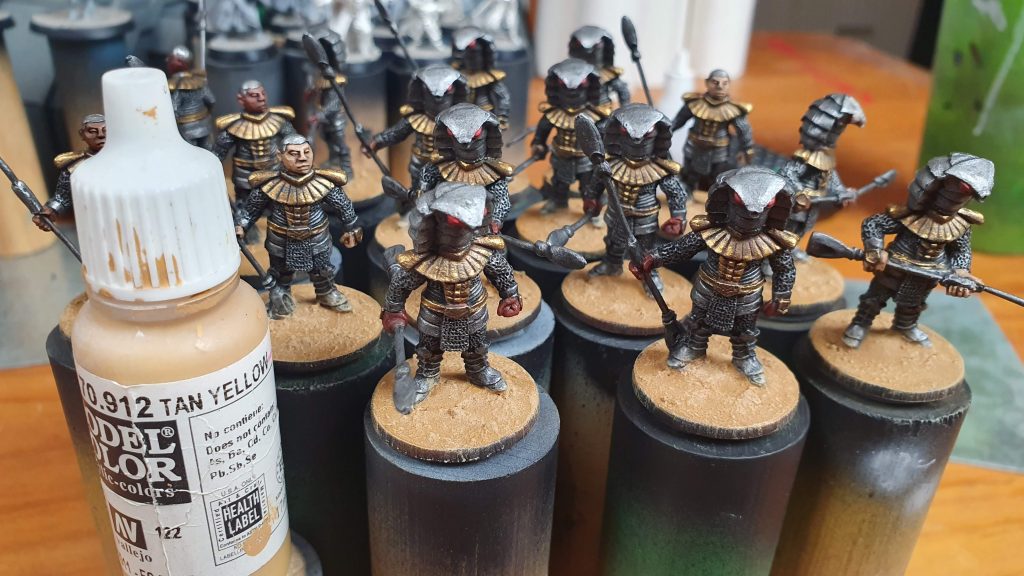 I could have used some washes to done the bases down a little, or just gone ahead and painted a darker colour but I couldn’t be bothered so just pressed ahead.  Whilst I did want something that represented “rich soil”, I had what I had so picked a colour I thought would drybrush up nicely and settled on Tan Yellow (again from Vallejo, Model Colour 70.912).  The overall effect would look great for a desert themed base, so perhaps I’ll roll with that for these guys.  I do have a lot of modern figures that have desert bases also so I guess from a continuity perspective they wont look out of place when my SG teams come barrelling out of the Stargate to face off against these Jaffa and the nasty Goa’uld that command them! 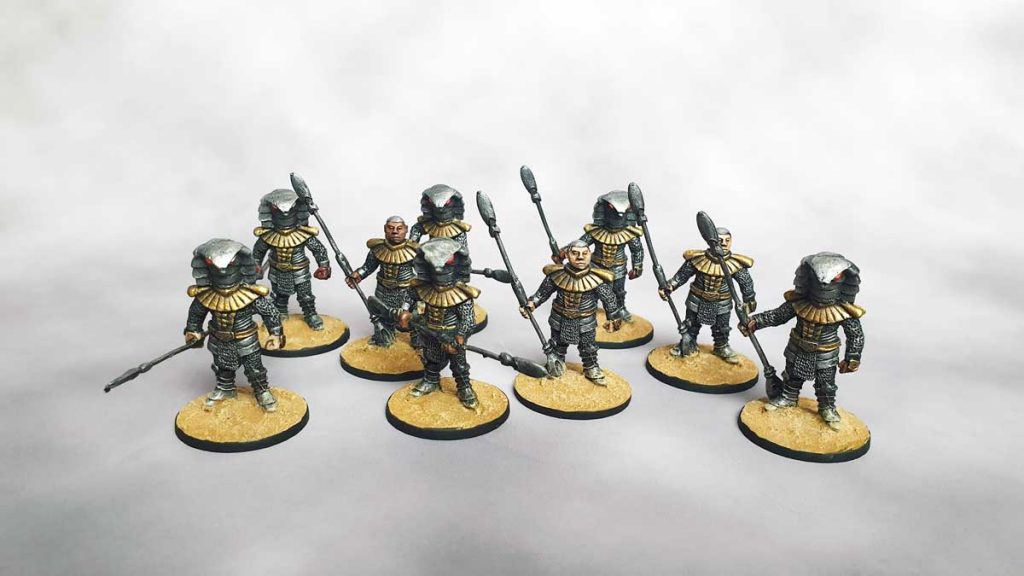 Overall I’m really pleased with how these guys turned out.  They have a simple paint scheme which made them quick to paint, I mean, there isn’t many ways to paint something that is mostly clad in metal armour, unless you want to get super fancy with your techniques which just isn’t my thing.

I’m looking forward to painting more of them and eventually popping some characters together for 7TV and playing a few games of Stargate: SG1.

Viv ChandraI've been a wargamer since my mid-teens, it's been a passion of mine since I played my first game of Warhammer Fantasy in 1994. Knights of Dice is the culmination of many years of scratch building terrain and a natural extension of the part of the hobby I love more than anything ... creating the little worlds in which we play!
Posted in:
Hobby Blog, Painting Logs
Tagged:
28mm, miniatures, painting log, SG1, stargate